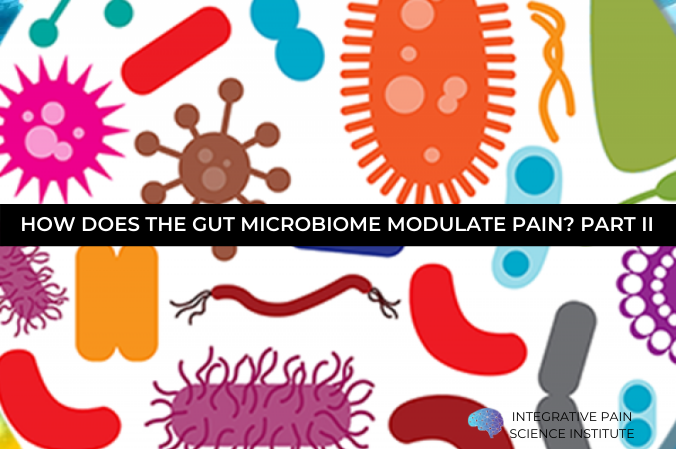 We have long known that specific brain centers produce and release several substances (like acetylcholine, adrenaline, and cortisol), that modulate gut peristalsis (bowel contractions), vascular tone, bacterial homeostasis, and nutrient absorption in the intestines. But we are now quickly appreciating that our gut microbiota (the collection of bacteria, fungi, yeast, and viruses that live in our intestines), and the substances they make and release, affect nociception by acting directly and indirectly on nerve terminals in the skin, muscles, joints, and deep tissues (1).

But the relationship of the gut microbiota with pain goes beyond modulating the response to noxious signals by peripheral nerve terminals; these bacterial mediators also act on neurons – but also on astrocytes and microglial cells- in the brain and the spinal cord, influencing ‘central’ sensitization and tolerance to pain. Moreover, signals from the gut microbiota also impact on important physiological states like mood, sleep and wake cycles, hunger and satiety, immunity, and hormonal balance. Remarkably, during chronic pain conditions a positive feedback loop – with negative consequences- is often at play, since chronic pain can impair the above processes, and these in turn can further modulate nociception and central pain perception to sustain chronic pain (2, 3, 4).

In a previous blog I discussed how gut bacteria by-products sensitize nociceptors in the gut, leading to chronic pain conditions such as irritable bowel syndrome (IBS) and inflammatory bowel disease (IBD). We’ll now take a look at how the diverse factors released by gut bacteria reach central neurons and influence peripheral and central sensitization, and their role in inflammatory and neuropathic pain.

Bidirectional communication between gut bacteria and the brain occurs through both neural pathways (vagus nerve terminals in the gastrointestinal tract) and a range of bioactive factors released into the blood. Through these pathways, an abnormal composition of gut bacteria (i.e. gut dysbiosis) can influence both primary hyperalgesia, defined by an increase in the excitability of peripheral nociceptors (afferent sensory endings and fibers), and secondary hyperalgesia (associated with changes in the excitability of neurons in the CNS, including the spinal cord and supra-spinal sites in the brain.

These actions are largely mediated by pathogen-associated molecular patterns (PAMPs), a variety of small molecular motifs conserved within microbe classes, which have shown to contribute to peripheral sensitization under chronic pain conditions, and aggravate several chronic diseases. Gut microbiota-derived PAMPs include bacterial cell wall components, such as LPS, lipoteichoic acid (LTA), peptidoglycan (PGN), and b-glucan, which are transferred into the circulation and bind to pattern recognition receptors (PRR), including Toll-like receptors (TLR 1-9) expressed on immune cells and sensory neurons in the dorsal root ganglia (DRG) of the spinal nerve (5, 6).

A Gut-Brain Superhighway: The Vagus Nerve and Pain

The vagus nerve innervates the digestive tract and senses gut activity through signals from endocrine cells located in the gut epithelia. Digested food (carbs, lipids and proteins) as well as bacterial components and metabolites (notably LPS, or endotoxin, and short-chain fatty acids, or SCFAs) act on enteroendocrine cells (EECs) to modulate their secretion. Notably, EECs were recently found to form synapses with vagal nerve terminals, and transmit information to the brain through both neurotransmitters (serotonin and glutamate) and gut hormones (cholecystokinin,  glucagon-like peptide-1, etc.) that regulate a wide range of processes like hunger, mood, stress, and pain.

People with fibromyalgia, a chronic pain condition characterized by central sensitization, were shown to have reduced vagal tone, whereas an abnormal vagal tone was also described in IBS and IBD (7, 8). Whenever vagal activity is depressed, so are its anti-inflammatory effects. This compounds disease symptoms by enhancing regional inflammatory responses in the gut. Moreover, vagal afferent fibers also express a subtype of LPS receptors (TLR4), through which a direct stimulation of brain centers may occur in IBS and IBD due to increased intestinal permeability and transfer of LPS across the gut mucosa (9). Interestingly, research has shown that a much more prevalent burden of daily life, stress, can lower vagal tone and potentiate inflammation. In view of the critical role of this gut-brain neural pathway in health and disease, therapeutic approaches to modulate the activity of the vagus nerve are being actively explored to reduce inflammation associated with various chronic pain conditions (10).

Vagus nerve stimulation (VNS) can be achieved in different ways. Cold exposure, singing, meditation, deep-breathing techniques ( e.g. Bhramari pranayama or “humming breathing”), and cognitive behavioral therapies are just a few strategies to increase vagal tone to help reduce both inflammation and chronic pain. More sophisticated strategies involve the use of implantable or transcutaneous devices that deliver electrical impulses to the vagus nerve; these are sometimes used in treatment-resistant major-depressive syndrome, as well as epilepsy, and were shown to reduce chronic pain in patients with fibromyalgia and arthritis (11, 12).

While an overt immune response is triggered by acute bacterial infection (bacterial invasion into the blood due to a breach in the skin or gut epithelia), a more subtle mechanism operates during gut dysbiosis, affecting peripheral and central pain sensitization. Neuroinflammation is considered a crucial mechanism underlying central sensitization in chronic pain conditions induced by inflammation or nerve injury. Recent work suggested that not only neurons, but also several other cells in the central nervous system such as endothelial cells, pericytes, microglia, astrocytes, and infiltrating immune cells, react to direct and indirect signals from the gut microbiota that contribute to neuroinflammatory processes (13, 14). Activation of glia (e.g. microglia and astrocytes) can lead to synthesis of proinflammatory cytokines or chemokines, such as TNF-a, IL-1b, and CXCL1, and can elevate and decrease glutamate and GABA levels, respectively, contributing to the development of central sensitization, hyperalgesia (enhanced pain in response to noxious stimuli), and allodynia (pain in response to non-painful stimuli) (5).

A role for gut bacteria in inflammatory pain is mostly supported by animal (preclinical) studies. Several studies have shown that germ-free (GF) mice (raised in a sterile environment from birth) develop visceral hypersensitivity accompanied by overexpression of TLRs and increased levels of cytokines such as interleukin (IL) 6, IL-10, or tumor necrosis factor (TNF)-α in the spinal cord. On the other hand, studies in mice suggest that the presence of commensal gut bacteria may promote hyperalgesia under some conditions. One such study, comparing responses to direct and indirect gut microbiota factors (LPS, carrageenan, TNF-α, IL-1b and CXCL1) in control and germ-free mice showed that inflammatory hypernociception is blunted in the absence of commensal microbiota. This effect was dependent on the availability of IL-10, a main anti-inflammatory cytokine, which was greatly increased in germ-free mice (15). Meanwhile, a recent study showed that vitamin D deficiency in mice induced tactile allodynia associated with neuronal hyperexcitability and reduced microbial diversity, characterized by an increase in Firmicutes and a decrease in Verrucomicrobia and Bacteroidetes (16).

Another type of pain that may be influenced by the bacterial composition in the gut is neuropathic pain. This is characterized by dysaesthesia (abnormal, unpleasant sensations) or allodynia resulting from nerve damage secondary to nerve trauma, chemotherapy drugs, or disease (e.g. diabetes or spinal stenosis) affecting peripheral and central elements of the somatosensory nervous system (17). Chemotherapy-induced peripheral neuropathy (CIPN) is caused by certain anticancer agents (vincristine, paclitaxel, platinum drugs, etc.). Studies in mice showed that commensal gut bacteria were required for optimal tumor-killing activity of oxaliplatin; strikingly, they mediated also mechanical hyperalgesia (enhanced pain) in response to this drug. This effect was reduced in GF mice and in control mice pre-treated with antibiotics, which showed reduced levels of macrophage infiltration and cytokines (IL-6 and TNF-α) in the vicinity of pain-relaying DRG neurons (18). These effects may result from damage of the gut barrier by chemotherapy drugs, which facilitates translocation of PAMPs into the circulation (19).

Neuropathic pain is also common in people with multiple sclerosis (MS), a neurodegenerative disease characterized by loss of myelin, the insulating lipid that ensheaths nerve fibers and ensures proper transmission of the nerve impulse. In addition to current evidence linking gut dysbiosis and MS symptoms, it was reported that gut bacteria can regulate the myelination of nerves, a discovery that opens up promising therapeutic avenues to treat MS (20).

Given the important role that gut bacteria play on peripheral and central sensitization associated with chronic pain conditions, several interventions targeting the gut microbiota are being tested in mice and humans with the goal of treating and hopefully eliminating chronic pain. The most simple ones are based on nutrition (healthy diets that include probiotics and prebiotics) and exercise, which contributes to maintain a healthy gut flora and was shown to increase vagal tone and optimize immune responses (5).

Fecal microbiota transplantation (FMT), also called fecal bacteriotherapy, consist in the administration of a solution of fecal matter from a healthy donor into the intestinal tract of a recipient in order to directly change the recipient’s gut microbial composition and confer a health benefit. FMT is used to treat many diseases, including Clostridium difficile infection, IBD, obesity, and insulin resistance. Potential mechanisms underlying the therapeutic effects of FMT on chronic pain include direct competition of pathogenic bacteria with commensal microbiota, protection of the intestinal barrier, restoration of secondary bile acids metabolism, and stimulation of the intestinal immune system. This approach has shown to provide relief for chronic pain conditions such as fibromyalgia, ulcerative colitis, and IBS (21, 22, 23). However, further research is clearly needed, as the efficacy of FMT for IBS has been questioned based on inconsistent results from recent clinical trials. (24, 25).