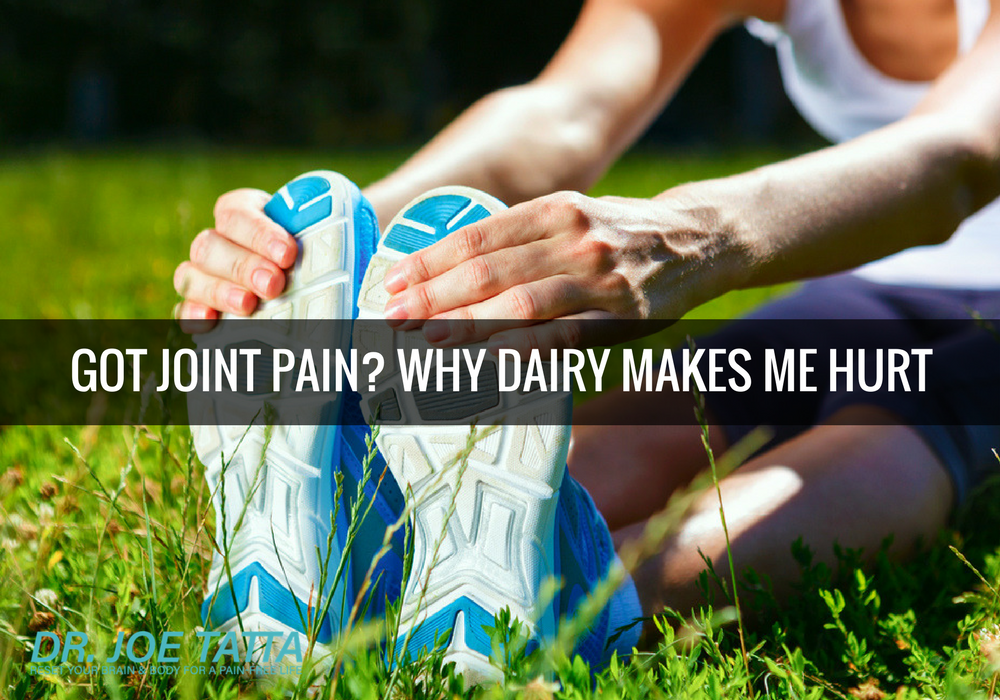 Most of us have been raised to believe that we need milk and other dairy products in order to have a healthy body, not only when we are young, but also as we age. But what if we have been led astray? Have you ever considered that we were not meant to consume the milk of another species or as you age you naturally stop producing the enzymes to digest dairy? I will articulate why you may want to take milk and other dairy products out of your diet, starting with the fact that unless you are an infant drinking your mother’s milk, you don’t need the dairy in order to be in good health. Humans are the only mammals that drink milk from another species, and when we do, it can cause us inflammation and pain in ways you probably never imagined.

1. Inflammation – Lactose, the sugar found in dairy products, is normally broken down by an enzyme called lactase (produced in the small intestine). The majority of the world’s population has either no ability or very reduced ability, to digest lactose after infancy, because adults no longer produce the enzyme. Why is this a problem? Dairy consumption can result in bloating, gas, diarrhea, and pain as the body tries to digest it. And if you are fortunate enough to be among the few that digest lactose, it quickly gets converted to glucose, which has the potential to alter the microbiome, elevate blood sugar, and causes systemic inflammation! Either way you look at it, all paths lead to Inflammation and pain, which we want to avoid.
Irritable bowel syndrome (IBS) is a painful abdominal condition characterized by changes in the patterns of bowel movements.  The symptoms develop over time, and can also include constipation and/or diarrhea.  It is common for those with IBS to also suffer from chronic fatigue syndrome.  Many patients with IBS report feeling less pain and discomfort when they stop consuming food with dairy.
2. Neurodegeneration – If the pain from gas and bloating isn’t enough to convince you to ditch the dairy, consider the milk protein casein, which acts like an excitotoxin. Milk intake has been associated with substantia nigra neuron loss, and a study published in the American Journal of Epidemiology found that men who consumed dairy products had an increased risk of the chronic and progressive neurodegenerative disorder, Parkinson’s Disease. (1)
You don’t need dairy in order to be in good health Click To Tweet
3. Immune Dysfunction – We usually associate dairy products with calcium, but many don’t think beyond in terms of what else might be in the creamy stuff. Milk contains pesticides, hormones and other contaminants that are both natural and synthetic. Hormones and growth factor occur naturally in milk, and help a calf grow to maturity, but is this necessarily good for humans? In addition, synthetic hormones are used on lactating cows to increase milk production.  You’ve probably heard of recombinant bovine growth hormone, or rBGH, as some companies now advertise that their products are free of this hormone; when humans consume rBGH, our insulin and estrogen functions are changed, affecting energy homeostasis and glucose metabolism. Translation – lower energy and trouble regulating blood sugar.

Cows get sick too, and when they have an infection, like mastitis, the treatment frequently used is antibiotics, which is ultimately found in the final products we consume. Antibiotics, whether we take them directly or get exposure from dairy products, can disrupt the flora of the gastrointestinal tract and promote dysbiosis and candida overgrowth. It’s important to maintain stable gut flora and intestinal integrity because they play an integral role in modulating immune responses. Finally, pesticides, polychlorinated biphenyls (PCBs), and dioxins are also examples of contaminants routinely found in milk products. All of these lead to decreased immunity and/or autoimmunity in humans.

Painful autoimmune disorders are increasingly associated with the common foods Americans consume, including dairy and gluten. The problems are related to a term called molecular mimicry. Proteins found in common foods like wheat and dairy are very similar to some human immune cells and common antigens. For example, when dairy is consumed, it can lead to food allergy, intolerance, and autoimmune reactions. Milk and the proteins found in dairy (casein, casomorphin, butyrophilin, whey) along with other foods such as oats, millet, soy, corn, and rice are able to mimic gluten and cause the same symptoms associated with nonceliac gluten sensitivity. (2)

4. Risk of Cancer – Casein, the protein found in milk, has been associated with many different forms of cancer. A study published in The World Journal of Men’s Health in 2014 found that the milk protein casein promotes the proliferation of prostate cancer cells. (3)  In addition, all those contaminants in milk – like PCBs and dioxins – are linked to cancer too. These toxins do not readily leave the body, are stored in adipose tissue (fat) and accumulate over time. In the long run, they not only influence cancer but are also shown to affect the immune, reproductive and central nervous systems.  As further evidence that dietary factors most certainly play a role in the development of cancer, a 2016 meta-analysis published in Nutrients found that dairy product consumption increases the risk of Non-Hodgkin Lymphoma. (4) Research also shows that high dairy consumption increases the levels of insulin-like growth factor-1 (IGF-1), which is a known cancer promoter. (5)

5. Reproductive Issues – Do you think that the hormones found in milk products – such as prolactin, insulin-like growth factor-1, prostaglandins, androgens, progesterone, and estrogen — affect our reproductive health and our hormone balance? You bet they do! The estrogens from dairy products have been linked to some male reproductive disorders. (6) And a 2014 study in the International Journal of Preventative Medicine linked dairy consumption to polycystic ovary syndrome (PCOS), one of the most common endocrine hormone disorders in women of reproductive age. (7) Symptoms of PCOS include painful menstrual cycles and weight gain, and the consequences include type 2 diabetes (and all its painful symptoms), problems with the heart and blood vessels, and uterine cancer. (8)

6. Central Nervous System disorders – Because dairy is inflammatory, it is also associated with diseases and inflammation of the central nervous system.  Multiple sclerosis, an unpredictable, disabling disease of the central nervous system, and neuromyelitis optica (affecting the optic nerves and spinal cord) have both been correlated with dairy product consumption, again through mimicry. (9)(10)

7. Diabetes – Diabetes is an inflammatory condition associated with many chronic pain syndromes. Insulin-dependent (type 1 or childhood-onset) diabetes is linked to consumption of dairy products in infancy. (11)  A 2001 Finnish study of 3,000 infants with genetically increased risk for developing diabetes showed that early introduction of cow’s milk increased susceptibility to type 1 diabetes. In addition, the American Academy of Pediatrics observed up to a 30 percent reduction in the incidence of type 1 diabetes in infants who avoid exposure to cow’s milk protein for at least the first three months of their lives.

Convinced You Should Ditch the Dairy?

Here is a list of the obvious foods to avoid:

And here are some hidden sources of dairy to avoid:

But What About Bone Health?

I know, the first question on your mind is, “What about my bone health?” It’s accurate that calcium is needed for bone strength, but the benefits do not exist after a certain threshold, and other vitamins and minerals besides calcium are also needed to create healthy bones. In fact, an 18 year Harvard Nurses’ Health Study following more than 72,000 women showed no protective effect of increased milk consumption on fracture risk. (11)

So where do you get the calcium you need? Vegetables provide this important mineral without the dangers of food intolerances, cross-reactivity, or ingestion of hormones and toxins. Osteoporosis risk is decreased by monitoring sodium intake, increasing vegetable consumption, and getting calcium from foods such as calcium-fortified non-dairy milk products, sardines, kale, broccoli, and other leafy greens. Don’t forget the importance of exercise, especially weight-bearing and resistance training. Weight-bearing and strength-training exercises are also some of the most effective ways to increase bone density.

An adequate intake of vitamin D is essential when we talk about the connection between calcium and bone health.  Ensuring 800-1000 IU of vitamin D daily, along with calcium, can decrease the risk of falls and fractures. (12)  Don’t rely on dairy alone to ensure healthy bones; be sure to combine calcium from food with vitamin D and exercise.

It takes time for the brain to break any acquired habit, and dairy is definitely addicting, but you will notice after about a week of eating dairy free, your body will adjust and you won’t think about it as much.  Go without dairy products for 21 days, and you will notice your cravings will be gone, and your pain will be lessened.   If you are an athlete, you’ll enjoy increased energy, speed, and recovery when joint pain is no longer an issue.  And while some people may notice different effects of eating dairy free, many report better skin and improved digestion, improvement with sinuses and post-nasal drip, weight loss, and fewer headaches!

There is a multitude of dairy-free products on the market now. Read the labels and cross-reference with my list above, to be sure there is no dairy lurking in the products you choose. You’ll be surprised at their taste and versatility!

Try it and let me know how it works for you. If you have already removed dairy from your diet and found pain relief, share your story with me here!